After some research, I decided to remove the lens hood from my 10.5 fisheye. I use the lens periodically, but always on FX bodies. I shoot it in FX image size to give me a few extra pixels; this just takes that to the extreme.

In the research I did, I found most people used a hacksaw to cut the hood, and did it in place. Some talked of cutting “until you hit the metal” which seemed like a bad idea, though apparently it works. I decided to take a different approach – disassembly, at least somewhat.

Below are the steps I took with photos along the way. The first step was to remove the focus ring, and slide it up just above its normal location. It is a bit sticky (I think held with light adhesive) but it is easy to lift up and slide. Don’t stretch it more than you need to! 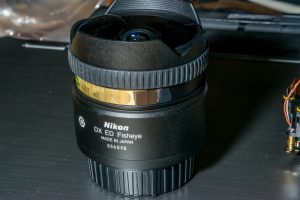 This exposes a metallic gold tape held at each end with black tape. The gold tape is not sticky, if you peel back the black tape at each end, it comes off easily. 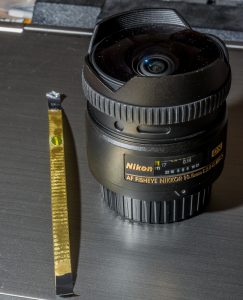 Here you see the gold tape and the exposed ring. Inside this ring are slots. If you rotate the focus now, you’ll see these slots can be lined up with 3 small screws. 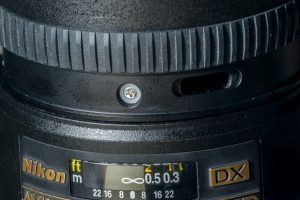 These screws are surrounded by a small white plastic insert which fixes the focus ring in place. With a small Philips screwdriver you can remove these, but very carefully as they tend to fly away as they pop out. They are not spring loaded, but may be under some pressure from the focus ring. 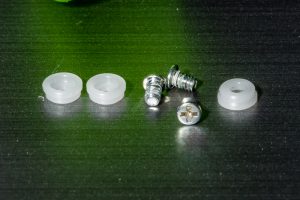 Here you can see the screws and rings. Set them aside. The focus ring is now loose, but you can still turn it. If you turn it to focus all the way to the closest focus, you can now slide the hood out about a quarter inch or so. 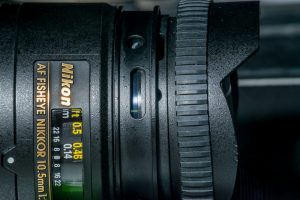 Here you can see how the screw hole is no longer visible in the slot, but is just becoming visible at the top of the lens frame. This gives you about a quarter inch more room to cut, so that your cut is NOT adjacent to the metal, but rather is above the lens glass itself, providing additional clearance. 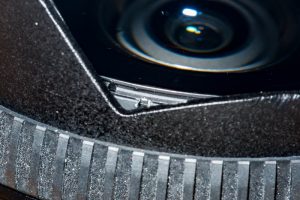 It’s worth noting that there should be a simple way to remove the hood. I THINK if you remove the outer ring (shown here) it might slide off. Might not. I could not get it to move, and applying too much pressure that close to the glass was a concern (obviously this should take a tool that can grab both sides, I only had a small screwdriver on one side – not recommended). If one could just remove the hood, it could be cut in any number of ways more safely. Anyway… 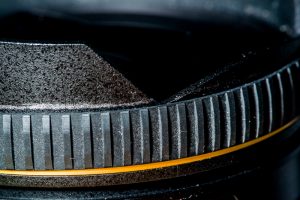 Online most people suggest mounting a pencil in something and rotating the lens to get a smooth cut-line. With the focus ring pushed up, however, it makes a great template itself. Push it up just a bit further so the gold ring is right at the bottom (and evenly at the bottom all the way around).

Now just take a pencil and mark against the top of the rubber ring as a guide, then push it back down. 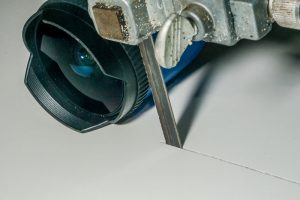 Now how to cut…. I considered a hacksaw as most used – seemed awkward for fine work. Considered a Dremel tool, but was afraid I could not keep it straight by hand, and did not see any real good way to make a jig, though I suspect someone with more grips and vices may come up with something. The hood rotates with the screws out, so you could clamp the lens casing and rotate the hood — except the hood not only rotates but slides in and out and can turn slightly askew, so it’s not a magic solution to get it free turning.

Anyway… I decided on a band saw. That will sound like a gross over-do, but — it’s dead stable, has so much momentum it cuts smoothly without any grabbing, and is very visible.

I took a piece of clean foam board (because my band saw base is not real clean) and put it down, taped up the barrel of the lens where the holes are (very important — dirt and dust can go in there easily and you could not get it out). I elected NOT to tape up the lens itself or the hood, as I thought the protection would get more in the way than help. With the hood slide out, there is about a fifth of an inch or more between where you will cut and the lens surface itself, maybe more, so reasonably safe. None of this “cut until you feel metal”. 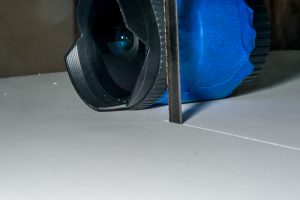 With it set up, I moved to the back side of the band saw (opposite where you would normally stand) and can see the blade clearly and where it hits the line.

Here is what I did NOT do that I should have — I should have measured the depth of cut needed and marked the blade through its length (think magic marker touching the side of the blade while it turns). If I had a depth indicator on the blade, I could more easily keep track of when I had cut deeply enough. I did it by eye; it worked, but it was not easy and on some areas I had to go back and cut again.

Obviously this is a bit dangerous to the hands if you are not careful, but I found it surprisingly easy to keep the cut straight (just roll the lens barrel resting on the foam but keep it from advancing forward) and judge depth (look a bit from the side and keep the cut at the same point on the saw blade all the time). I had the blade at a moderate speed, same as I use for cutting wood. 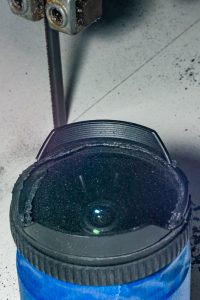 I do not know if you can see it here, but when it cuts through, it is either melting or distorting the plastic a bit, so the cuts come through as a bubbled up area. This is brittle and very thin (think thin foam) and breaks easily. There is a lot of dust obviously on the glass but dust is easy to deal with later (though I took care not to brush anything across it in case any of the dust had metal or other abrasives in it).

Next step is a trim. I keep a scalpel around; all sorts of uses for a very sharp knife, and put a fresh blade on it. This made it very easy to trim away the foamed-out areas. 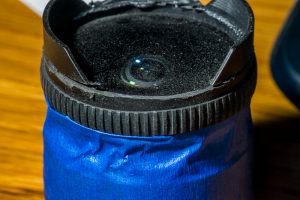 This is a rough cut of removing a piece. 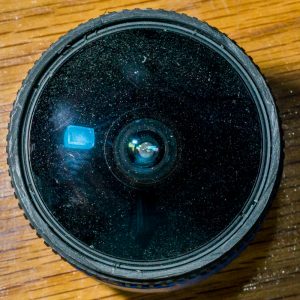 Here I have cut down all the way around with the knife, and scraped any fragments sticking out. The result is a bit rough but mostly cosmetically so, all the loose pieces are gone. 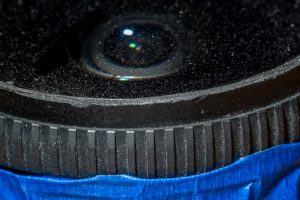 An edge view from when the knife was done. 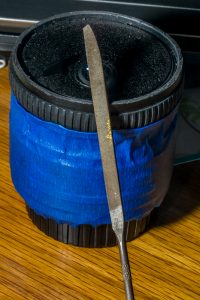 Next step was a small file. In retrospect an emery board may have been easier, this cut a bit slow and a bigger surface may be easier to keep safe. Note that this is probably by far the most dangerous part, as filing by hand any tiny slip could hit the glass. 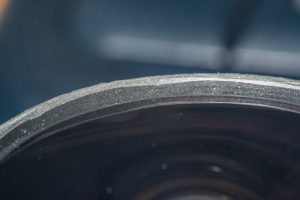 Depending on how much you want to work, you can get this anywhere from functionally smooth (i.e. won’t grab cloth, etc.) to cosmetically smooth when viewed up close. I stopped early with functional as I really was worried about a slip of the hands and touching the lens with the file. Sounds strange, but that is much harder to keep safely off the glass than the band saw. 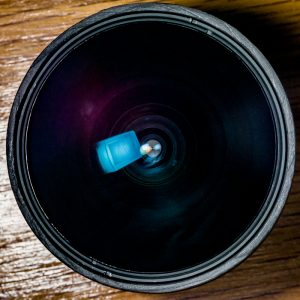 Blow off with air, then wipe with microfiber – not a scratch anywhere. 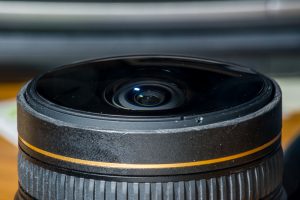 Put back the gold ring, slide the rubber ring back down where it belongs (I think it had a bit of adhesive gluing it to the ring, but it also seemed tight enough to hold without adhesive, so I did not add any glue. Besides, I don’t use the focus ring anyway.) 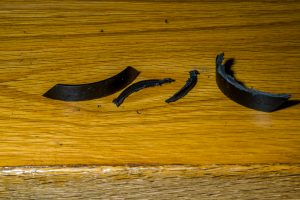 Now this is the part I really disliked — here are the leftover parts. Online everyone recommends affixing the larger two into the Nikon lens cover so that the lens will not touch the cover front. It looks iffy and kludgy, but… my ideas involved padding that could touch the lens, and the more I thought about it, the less I wanted to risk dirt getting on it. So I did the glue thing also.

My one thought that I may try later if this does not pan out is to take velcro, hook side out (toward the lens surface), and glue it on, then use that to hold something like cotton balls. These could then be easily replaced for each shoot. But there’s still the chance of getting grit on it during during a shoot and scratching the lens. Maybe. Will consider it later. 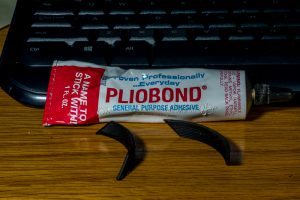 I tried super-glue, and it was a complete failure. There are little ridges in the cover that hold the plastic pieces away from the smooth edge, and it just pops back off.

So I fell back to my favorite glue for anything that flexes — Pliobond. I also have used it to re-glue Nikon rubber grips with good success. Highly recommended, but it dries very slowly, so you need a couple days for a complete set. 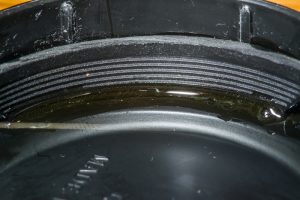 Not pretty, but besides some glue against the edge, I put a bead along the inner cap (furthest away from the lens surface) to add some strength. It won’t be seen anyway. Set aside for a couple days.

And out to give the lens a try…. but first to find a before shot to show the hood shadow. 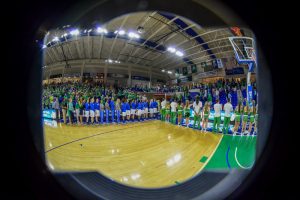 Above is the before framing on FX (I didn’t think to take a photo of something handy for a same-same before/after). 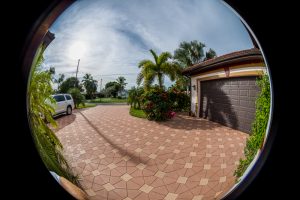 And the final result. Don’t forget to turn off lens calibration if you are using it, or it will try to de-fish the result (which you may want to do — but you may not also. it’s nice to see it circular first).